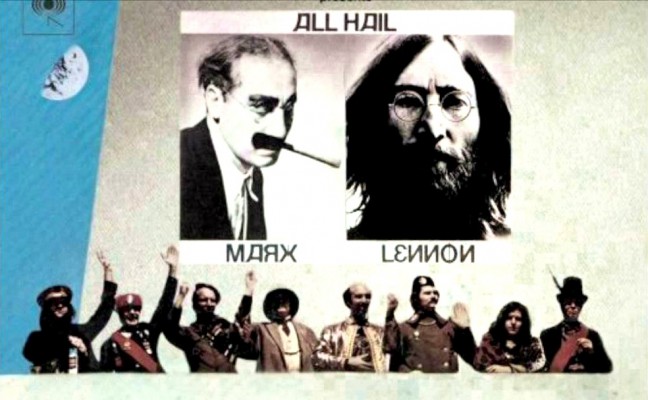 ** Waiting for the Electrician or Some­one Like Him / Col. 9518 (1968)
***** How Can You Be in Two Places at Once When You’re Not Anywhere at All? / Col. CS-9884 (1969)
***** Don’t Crush That Dwarf, Hand Me the Pliers / Col. C-30102 (1970)
Peter Bergman, Philip Proctor, David Oss­man and Philip Austin first appeared in 1967 as a mutant hybrid of James Joyce, Monty Hall, Douglas MacArthur, and Flash Gordon. They were the first, and remain the only, comedy group whose primary medium was the stereo phonograph record itself; thus, their best albums stand up to literally hundreds of listenings. Mul­titracked, multileveled, multidimensional—one never gets to the bottom of them. Consistent themes recur from LP to LP: that changing TV channels is the fundamental aesthetic and political experience of modern times; that aliens long ago took over California; that the U.S.A. lost World War II (we were fighting fascism, remember).

Electrician, their first outing, is only fair, but contains the incredible “Beat the Reaper,” the first of several game-show parodies (“Hawaiian Sellout,” “Give It Back”). Two Places features an excellent if limited Sam Spade satire, backed with the first full flowering of Firesign genius, a time trip involving a used-car salesman, W.C. Fields, and the aforementioned author of Ulysses, who is liberally quoted. Dwarf, a complete work, scrambles a fascist future, high-school madness, old movies, the Korean War, ethnic humor and uncontrolled paranoia to emerge as the ultimate answer record to Catcher in the Rye; it is also the greatest comedy album ever made.*** I Think We’re All Bozos on This Bus / Col. C 30737 (1971)
An ambitious, overly rational work about a future run by machines and populated by clones. Spooky, but a little too obvious. And, as the Firesigns would later claim, not insane, and that hurts.

** The Tale of the Giant Rat of Suma­tra / Col. KC 32730 (1974)
A half-assed comeback containing only one good joke in the course of a meandering, pointless Sherlock Holmes parody.***** Everything You Know Is Wrong / Col. KC 33141 (1974)
The real comeback, in which daredevil Re­bus Cannebus attempts to put out the sun in the center of the earth; slaves seize power; Erich von Daniken gets his; aliens get us; Nazis emerge from the South American jungles to eat moss; and the lights go out all over the world.

**** In the Next World, You’re on Your Own / Col. PC-33475 (1975)
Based loosely on the popularity of Billy Jack Dog Food (“The kind Billy Jack eats”) and Marlon Brando’s refusal to accept an Academy Award; terrestrial destruction continues as media pigs eat flaming death; cop shows take over TV; aliens retreat into the central cortex; and the hero knocks over a floor display of P. J. Probé wine. A triumph.

***** Forward into the Past / Col. PG-34391 (1976)
Two LPs of Firesign’s best over the years, brilliantly selected and programmed. Horrifying, death-dealing, life-enhancing.

** Just Folks… A Firesign Chat / But­terfly FLY-001 (1977)
In the ups and downs of Firesigniana, another down: mostly pallid, single-tracked parodies of Jimmy Carterland, though there is that commercial for “Confidenz in the System,” a new wonder drug, and a few random lines are inexplicably hilarious. A stall, perhaps—the future calls.